Bribing kids to eat vegetables is not sustainable

How can you get a fussy child to eat vegetables? It’s a question that plagues many frustrated parents at countless mealtimes. Some take to hiding morsels in more delicious parts of meals, while others adopt a stricter approach, refusing to let little ones leave the table until plates are clear.

According to koodakpress، One “alternative” idea touted recently is for parents to essentially bribe their children, depositing money into a child’s bank account as a reward when they eat vegetables – an idea actually backed up by research.

A US study in 2016 showed that the technique continued to encourage primary school age children to eat their greens for up to two months after these incentives were stopped. Children who were incentivised for a longer period of time were more likely to continue eating vegetables after the deposits ended too.

The core idea here is that, providing children have the cognitive ability to understand the exchange, they will learn to eat healthily as well as learn the value of money. After a while, they will continue eating the food, not because of the reward, but because they will get into the habit of eating healthy.

But one study is really not enough to draw conclusions and suggest action – especially as there was not a control group to compare money with other types of incentives, or no incentive at all.

And monetary incentives can actually decrease our motivation to perform the activity we are paid for, and eventually we lose interest. So, even if bribing kids with cash to eat their greens works at first, it is not sustainable in the long term.

Non-monetary rewards aren’t much better either. The phrase: “You can have dessert as long as you eat your sprouts”, will ring a bell for most people. This, though said with the best intentions, may increase the intake of the target food in the short term, but can convey the wrong message to its receipents: “This food must be really bad if I am getting something for eating it!”. It not only places dessert as a food of high value – a trophy that is earned – but also teaches kids to dislike the target food. 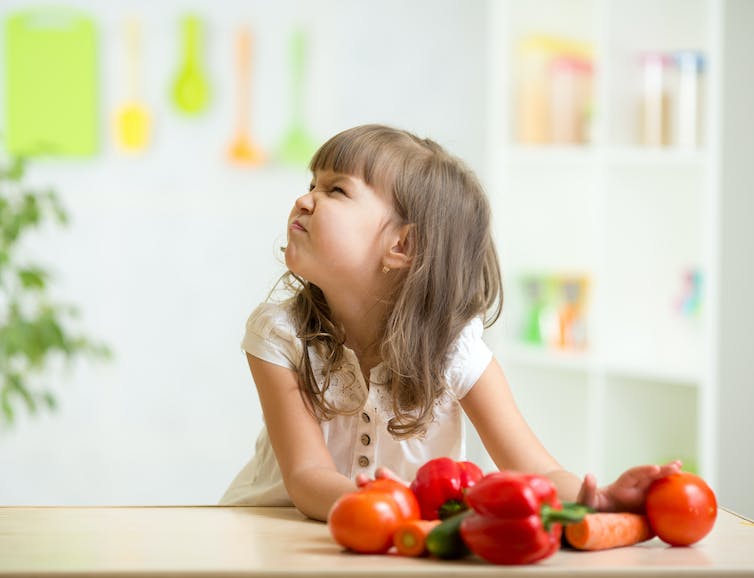 So what can you do instead? First and foremost, start early. Formation of food preferences start in the womb, and the first months of life are crucial in developing eating habits. The older children get, the more exposures they need to a novel vegetable in order to consume it. Which brings us neatly to the next point.

Vegetables must be offered frequently, without pressure – and you mustn’t get discouraged by the inevitable “no”. Even if you have missed the first window of opportunity, all is not lost. Parents can lose hope after offering the same vegetables between three and five times, but, in reality, toddlers in particular might need up to 15 exposures.

You also need to let your children experience the food with all of their senses – so don’t “hide” vegetables. Yes, sneaking a nutritious veggie into a fussy eater’s food might be one way to get them to eat it, but if the child doesn’t know a cake has courgettes in it, they will never eat courgettes on their own. It can also backfire if children can lose their trust in food when they realise they have been deceived.

Likewise, don’t draw unnecessary attention to specific foods that you might think your child is not going to like. Sometimes our own dislikes get in the way, and create the expectation that our child is not going to like it either. Our food preferences are formed through previous experiences, which children don’t have. Praising and bribing are commonly used, especially when we don’t expect children to like the food offered, but it can be counterproductive. Instead, serve food in a positive environment but keep your reactions neutral.

This isn’t just about what is on the plate, it’s about a relationship with food. So if your children are old enough, let them help in the kitchen. It can be very messy and time consuming, but it is an excellent way to create a positive atmosphere around food.

It is also important to have frequent family meals and consume vegetables yourself. It’s been shown that children who eat with family do eat more vegetables. Kids often copy adult behaviours, so set a good example by routinely serving and consuming vegetables.

There is sadly no single answer as to what will work for your children, and it might be a case of trial and error. But these actions can create positive associations with all kinds of foods, and you can help your kids lead healthier lives – saving yourself a bit of cash while you’re at it.