Parents are repeatedly told to watch what they are feeding their children, but they must also keep a keen eye on how much of it they are serving.

According to koodakpress، As the place where they consume around two thirds of their daily food intake, being obese or overweight begins at home for children. Child portion control has become so much of a problem that the World Health Organisation (WHO) has declared families’ healthy food portions critical to childhood weight management.

But very little is known about what exactly influences parents’ portion size choices for their children. Previous research into child weight management has identified gaps in parents’ knowledge, denial of their children’s weight status, and cultural practices as barriers towards healthy eating. Few studies have been done into parents’ portion behaviours, however.

To find out the situation in the UK, we conducted a series of group discussions with 22 parents from across the country – mainly mothers with overweight children above the age of five – along with four family weight management caseworkers. Unlike previous qualitative research, we wanted to get answers directly from adults.

So far, efforts to explain the consumption of large portion sizes have focused mainly on how the shape and size of dinnerware provides visual prompts that influence consumptionbeyond our consciousness, as well as the availability of low cost, large quantities of high energy dense foods.

But our findings suggest that both parents’ emotional and habitual responses, and beliefs are also potentially important influences on their portion control behaviours. 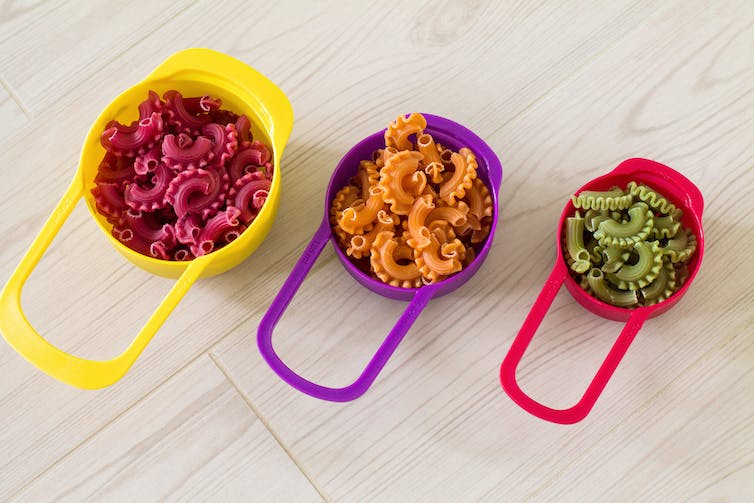 The parents who took part in our research had limited knowledge about what healthy portion sizes were for themselves and their family members as supported in previous research. However, this is not too surprising as there is very little official public health guidance on age appropriate portion sizes.

They, and the caseworkers, also said that they found it difficult to talk to the children about the need for smaller portion sizes to manage weight. This builds on previous research showing that greater child weight is associated with poor parent-child communication.

Both parents and caseworkers agreed that part of the difficulty in communicating with children arose from parents’ fear of lowering their children’s confidence and causing anxiety, particularly among older children. In addition, the parents revealed that along with the fear of causing eating disorders and guilt of restricting food, they worried about the possibility of being disliked by their children.

On the other hand, some parents believed that measuring portion sizes required too much mental effort and time. Cultural food practices were also highlighted in conversations with parents, in relation to their concerns towards food wastage where they admitted that if they cooked too much food, they would overfeed, rather than not serve it. These findings reflect previous research suggesting that parents’ core values in relation to food waste is instilled during their own childhood, where it was often expected that all food on the plate should be eaten.

The parents in the study also had low confidence in their ability to manage their children’s weight through portion control due to their own unsuccessful attempts at losing weight.

The parents we spoke to said they had a habit of using plates for portion guidance and that they found it difficult to provide healthy portion sizes when the little ones moved to adult sized plates. As we know, dinnerware has increased in size over the years, leading to serving and consuming larger portions. Most parents also had no weighing scales and agreed that they had no time or motivation for using them compared to dinnerware for portion control, as reported elsewhere.

From what we have found, it appears that family weight management programmes which target portion control or focus purely on one aspect of the problem – such as environmental strategies, which target things like utensil and dish size – may not be as effective as those that account for parents’ own knowledge, skills and motivations.

Further research is needed, but from what we’ve found in this study, there are some solutions that could be easily implemented. Family weight programmes should provide parents with ideas for quick and simple ways for measuring healthy sized portions, such as using hands as a guide, whereby children’s hands are used for measuring children’s portions and adult’s hands are used for adult portions. Parents could also be helped to improve their communication skills and problem solving techniques in order to address their own emotional issues with food.