According to koodakpress، While many children spend December wondering what Santa Claus will bring, six-year-old Amelia Campbell’s mind has been grappling with weightier thoughts.

The 15-minute walk to her central London primary school often takes her past homeless people sleeping rough or selling The Big Issue, prompting many difficult questions for her parents.

“Why don’t they have a home? Can they come home with us? Why can’t they go back to their mums and dads? Why can’t we give them more money? Normal children’s questions,” says her mother Jessie Campbell, 42.

“She was asking lots of questions and we answered them as best we could – sometimes it can be quite hard.”

Ms Campbell and her husband Andrew, 41, delicately explained to their daughter “that not everyone has a home to go to, and that we’re quite lucky that we do”.

“We said that some people may not have mums and dads who would be happy to have them back at home; some people may be far away from home, such as refugees, and that we can’t open our homes to everybody.”

In Westminster, the borough in which Amelia lives, 2,767 people were recorded as sleeping rough last year in statistics compiled by St Mungo’s homelessness charity.

Amelia was troubled with what she saw on her way to school, but watching her mother buy The Big Issue one day gave her an idea.

“We said the magazine is printed to raise money for the people selling them,” says her Ms Campbell. “She said, ‘But I don’t have any money. I don’t have anything I can give.’ So she thought if she wrote a story and sold it to her friends she could raise some money.

“She was really troubled by the fact there was nothing she could do because she doesn’t have much power as a child, so that’s where it came from.”

Her parents suspected she might not follow through with the idea, but their daughter was soon reaching for her paper and crayons to write an illustrated story about two dragons that went on holiday to the rainforest (a subject she chose, she says, because “in most books there’s no dragons”).

Admittedly, her seven-page booklet, titled The Two Dragons, contains more colourfully scrawled mythical beasts than the typical edition of The Big Issue. But Amelia was soon selling printed copies for 50p to everyone she knew – family, friends, children at her Beavers group.

“I wanted to help the homeless because they have nothing at all,” she told The Independent. “I wrote a story because I wanted to make more money than my pocket money.” 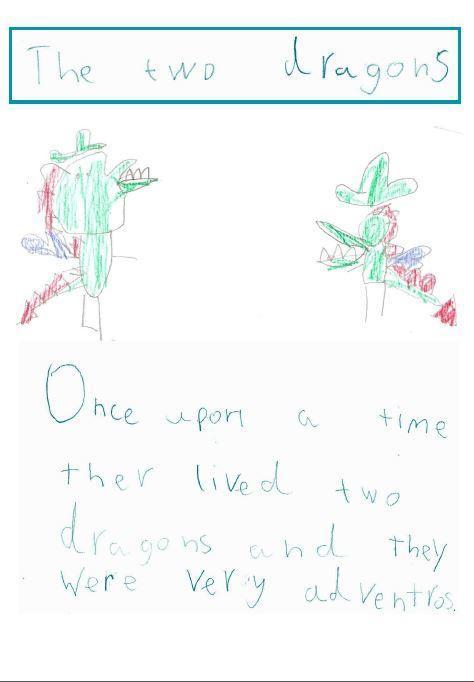 After her parents set up a crowdfunding page for further donations, Amelia has raised £1,200 so far. The family are to give half of the money to the housing charity Shelter.

The rest will go to The Passage, a local charity runs a hostel in Pimlico which offers shelter to some of London’s estimated 4,000 nightly rough sleepers. It also provides advice on housing, benefits, and health to around 100 people a day at its a resource centre in Victoria.

Nichola Wilson, relationship manager at the charity, says “everyone’s hearts melted in the office” when Amelia’s family contacted them with her story.

“It’s wonderful,” she adds. “It’s really heartwarming to see someone so young as Amelia has gone the extra mile, has been asking her parents questions, and wanted to do something.”

The Passage sends staff into schools to speak to pupils, and Ms Wilson said educating young people about rough sleeping can help to “remove any stigmas around the subject”.

Ms Campbell admits her daughter may be too young to understand the complexities of tackling homelessness.

But she adds: “It’s good for her because she feels like she’s made an impact. It’s a nice feeling when you’re small.”

The six-year-old is “anxious to give the money to the homeless before Christmas” but “pleased with herself and that it’s gone well”, says her mother.

She has also been an inspiration to her own parents, who volunteer at a local shelter.

“We haven’t pushed Amelia towards this,” stresses Ms Campbell. “Actually she has been quite inspiring to us. We’ve done more charity work because of her. I’m very proud of her.

“Now she’s determined to be a charity worker when she grows up.”

Then again, when you’re only six, perhaps it’s best to keep all career options open.

“She also said she wanted to be a fairy,” says Ms Campbell. “So who knows what she’ll grow up to be.”